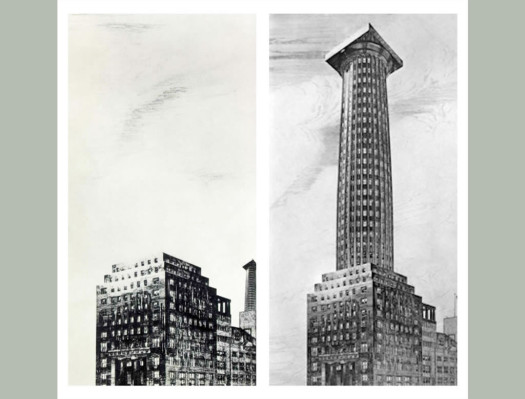 This proposal, part of an exhibition of Late Entries to the 1922 Chicago Tribune Competition, was meant to criticize the exhibition organizer’s purported objective: to redefine skyscraper design in a post-modern era. Changes in production technology and distribution methods caused major American newspapers to start downsizing people, machinery, and consequently space in the late 1970s. Within that context, the question should have been whether a skyscraper was the adequate response to such radical changes. In the exhibition catalog I explained: “This is why I propose a close look at the base of [Adolf] Loos’ column (…) Unassuming, (…) perhaps even contextual.” Mischievously, the proposal also turned the overt phallus of Loos’ design into a tail (penis, in Latin).